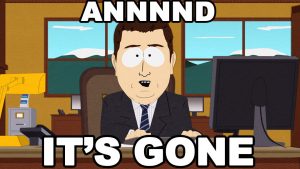 So I totally had another topic entirely queued up for the day… and then I noticed Bitcoin.  Have you noticed that BTC is trading at 2445?  This is down from SUNDAY where it was over 3k.  ETH is actually doing worse percentage-wise – at least today ($337.47, down about 15% on the day).

This is major. And, if you think I’m being overly flip, I call your attention to the fact that I had holdings at Mt. Gox when it went under.  So I feel like I’ve earned a bit of slack on that particular issue.

What’s interesting to me about this is not just the clear evidence that we were in a bubble (but we all knew that already, right? — I said as much last week) but instead the fact that I’m thinking it’s exacerbated by the ongoing DDoS attacks against major exchanges like Bitfinex. As we know from the intrepid DDoS pioneers who first proved it at Mt. Gox, a highly visible and directly user-impactful attack against a major exchange – in the case of Bitcoin specifically – can and does tend to crater the price. Or, in the case of right now, at least contributes to a multi-day cratering that has the potential to go on for a while.

So that’s interesting.  But I’m actually more interested in the deliberate manipulation of the price as a result of attacker activity – or, put more accurately the potential for deliberate price manipulation as a result of what may or may not be intended to accomplish the same. You may recall that there were observable price fluctuations when Mt. Gox was under attack all those years ago. I commented on them at the time and pointed out about how someone could make a million dollars manipulating the price of Bitcoin so long as there’s an exchange out there that lets you short sell it.  I won’t go through it all again now, but suffice it to say, you can do it.  You’d probably go to jail though, so maybe don’t try. Looks like that might still be true in light of the impact of the DDoS in this round of attacks.  It’s hard to tell because of all the noise, but it’s an interesting working theory.

The question is why though.  Is it just perception — the way that negative news from a company drops the price of a security? Is it all just smoke and it’s just a fluke dip in an already major correction?  Also could be.  But there are other options.  There’s not a huge money supply for most cryptocurrencies… and, exchanges handle large chunks of transactions (e.g. I saw a stat that Bitfinex handles 10% of the world’s trading). So an availability-based attack against an exchange could have a few direct consequences. First, I’m thinking it could directly impact liquidity. Bitcoin doesn’t have market makers like securities do – in part, because it’s well, already liquid… it’s designed to be a currency after all.  But speculators don’t really treat it like a currency, do they?

They treat it like a commodity.   Meaning, it’s not a “end” in and of itself for investors and speculators to obtain BTC.  They don’t want to spend it, they want to convert it back and forth to USD and bet on price movements.  So, they view BTC as valuable only to the extent that it can be converted into USD.  For that to be relevant, there needs to be liquidity.  But if the exchanges aren’t responsive… and there’s a low money supply anyway, liquidity goes down.  Meaning that prices are impacted by sales.  Meaning, each sale in what would ordinarily be a minor sell-off has a disproportionate impact – in effect, it cascades.  That’s the theory anyway.

Can I prove that?  No.  But I’d like someone who has a clue about economics to be looking into it.  Maybe there is.  If so, I expect eventually we’ll learn these things are connected.